DUO was established as a fishing tackle distributor in the year 1995 when president Hisahiro Matsushita went independent and started his own company. The lure business of the 90's was severely influenced by the Japanese recession. However, DUO never compromised its principles and did not give up on the initial concept of making products of the highest quality. -Adhering to this principle, even at a time when the majority of companies switched to foreign factories for cheaper labor cost, DUO did not abandon the production in Japan for the inferior production in the overseas market.

Two years after the launch of the company, sales revolving around products created at the hands of Mr. Masahiro Adachi, one of the most acclaimed young designers in the country, were commenced.

Now in its third decade, DUO is a widely recognised brand in Japan's fishing industry, a country largely seen as the pinnacle of lure manufacturing.

DUO's chief designer and current CEO, Mr. Masahiro Adachi is well-known for keeping true to the height of basic performance and also has a world reputation for producing magnificent lures in which simple beauty is combined with outstanding performance.

By the year 2016, DUO's range of products included over 300 models and the number of lures sold reached over 20 million units. In addition, since 1999 the company has also been active in the field of OEM, supplying products to some of the top brands in Japan, as well as enjoying its own success. 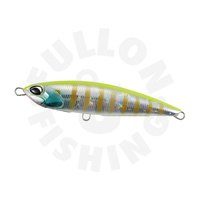