The 1930’s were the glory days of big-game fishing. When captains of industry favored fishing rods over safari hunts. When men like Ernest Hemingway were often seen smiling through their pipes while posing next to 500-pound ocean monsters. It was in this time that a small Miami boat engine repair shop called Finley Norwood produced a legend.

The first Fin-Nor reel weighed 35 pounds. It was a collaborative effort between inventor Frederick Martin Grieten and a handful of salty Miami captains, most notably Captain Tommy Gifford.

It was on Gifford’s prototype reel in 1933 that caught a 527-pound bluefin tuna in Cat Cay. Word spread and Fin-Nor was on the map. Since that time, Fin-Nor reels have racked up over 900 world records listed with the I.G.F.A.

Today, Fin-Nor is continuing their legacy of testing limitations with newer, ultralight metals and advancements in engineering. With fine craftsmanship and unmatched durability, they truly are the gold standard of saltwater fishing reels. Now it’s time to build your own legacy… 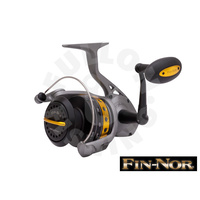